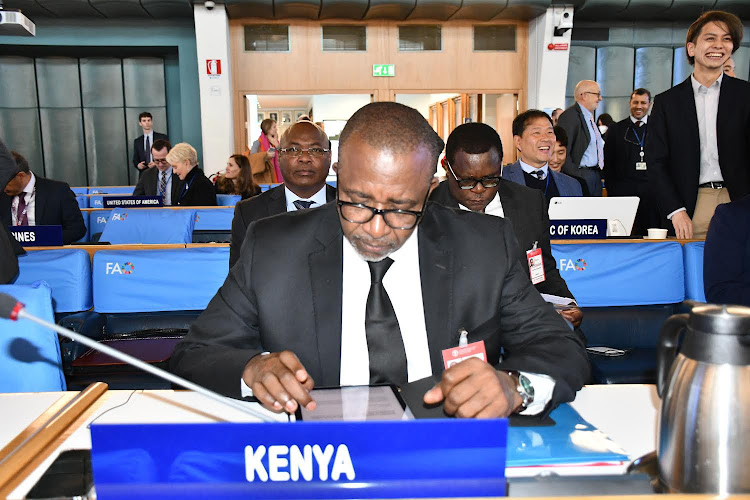 Kenya’s bid to achieve food security has received a boost after the country was admitted to the executive board of the World Food Programme.

“As we welcome this nomination, we reaffirm our commitment to work together with the international community to end hunger, achieve food security and improved nutrition by 2030,” he said while delivering his acceptance speech.

Speaking in Rome, Italy during the Food and Agriculture Organization (FAO) Council meeting, Linturi assured the Council members that Kenya will proactively participate and collaborate with other WPF executive board members with the ultimate aim of achieving food security globally.

“WFP has been a valued partner to Kenya and this nomination comes at a time when our country and the rest of the world is facing challenging times to the agrifood systems among them climate change which has exposed millions of people, especially small-scale farmers, low-income households, indigenous peoples, women and youth in developing countries, to acute food and water insecurity,” stated Linturi.

The Cabinet Secretary promised that Kenya is ready to work together with the international community to end hunger, achieve food security and improved nutrition by 2030.

Lusaka has also welcomed Kenya’s nomination to join the WFP top organ adding that county governments will join hands with the national government to ensure the country benefits from the WFP post.

The event was graced by WFP top officials as the FAO Council meeting concluded in Rome.

The Horn of Africa region, including Kenya is experiencing the worst drought in 40 years after four failed rain seasons leaving millions of people facing hunger and drought.

About 4.5 million Kenyans are facing starvation and over 2.5 million livestock worth Sh1.8 billion has already been lost since the start of the prolonged drought increasing the state of food insecurity.

Read the original article on This Day.