The rollercoaster and exhilaration of being a demolition specialist  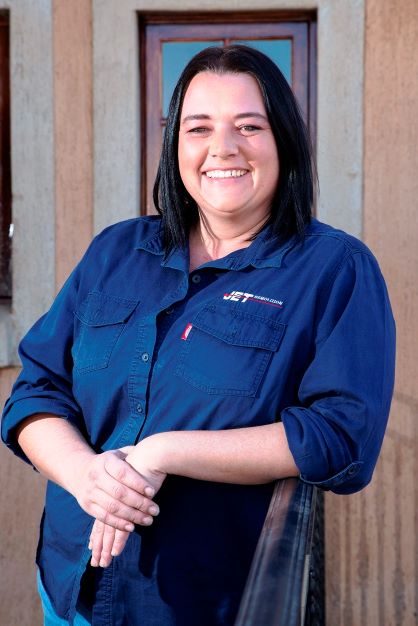 22 June 2022: In celebration of International Women in Engineering Day (INWED) on 23 June, Jet DemolitionContracts and Project Manager Kate Bester (NDip. Civil Engineering, PMP) highlights being in close proximity to a controlled implosion for the first time. “I was expecting a typical movie scene with huge fireballs, rubble being thrown everywhere, and people running and panicking,” recalls Kate.

However, this could not be further from the reality. “Yes, it was loud and overwhelming, but also controlled and elegant.” Ironically, the point that truly struck Kate was the silence. When a building is ready to be imploded, the exclusion zone is cleared for safety, resulting in city streets being somewhat desolate and eerily still. “The surreal quiet, contrasted to the absolute exhilaration of a controlled implosion, describes our work perfectly, an absolute rollercoaster!” adds Kate.

Kate graduated with a National Diploma in Civil Engineering from the Nelson Mandela Metropolitan University in Port Elizabeth in 2009. During her studies she carried out her in-service training with Aurecon, the former Ninham Shand. She started out as a student technician and worked her way up to Resident Engineer on large-scale, remote sites. Kate joined Jet Demolition in 2014 and currently serves as an exco member in addition to her role as Contracts and Project Manager.

Although she has been with the company for eight years, Kate stresses that due to the heavy industrial demolition works undertaken by the company, she experiences something new every day. Due to her role, she has insight into a project from inception to close-out. When a request for quotation (RFQ) is received, her duties include visiting the site, validating the scope, determining methods and approaches to the works, followed by preparing a commercial bid and offer based on provisional resource allocations, durations, and methodologies.

If the bid is successful, Kate is then responsible for managing the project, including all commercial and contractual phases, and providing technical support to the on-site team as required. In addition to her primary role, Kate also looks after the company’s marketing efforts. A major challenge that Jet Demolition has to contend with is the construction industry being under intense pressure.

“There is an increasing focus on commercial competitiveness as opposed to the quality of the service rendered,” says Kate. She points out the common practice of immediately entering into commercial negotiations, without consideration of the nuances that large, complex projects typically require.  Price is a critical factor that must be considered, but not at the expense of responsible contracting, she notes.

With regard to being a woman in her role, Kate notes that industry has made leaps and bounds from the first time she set boots to ground versus today. “There is still the odd person who immediately assumes that you are the appointed safety officer, but generally after a quick correction we have a good laugh about it and get down to business.”

INWED from the Women’s Engineering Society (WES) celebrates its ninth year in 2022. Figures as of June 2021 indicate that only 16.5% of engineers are women. INWED gives women engineers around the world a profile when they are still hugely under-represented in their professions. As the only platform of its kind, it plays a vital role in encouraging more young women and girls to take up engineering careers.

Due to the heavy industrial demolition works undertaken by #JetDemolition, Contracts and Project Manager Kate Bester experiences something new every day. #INWED