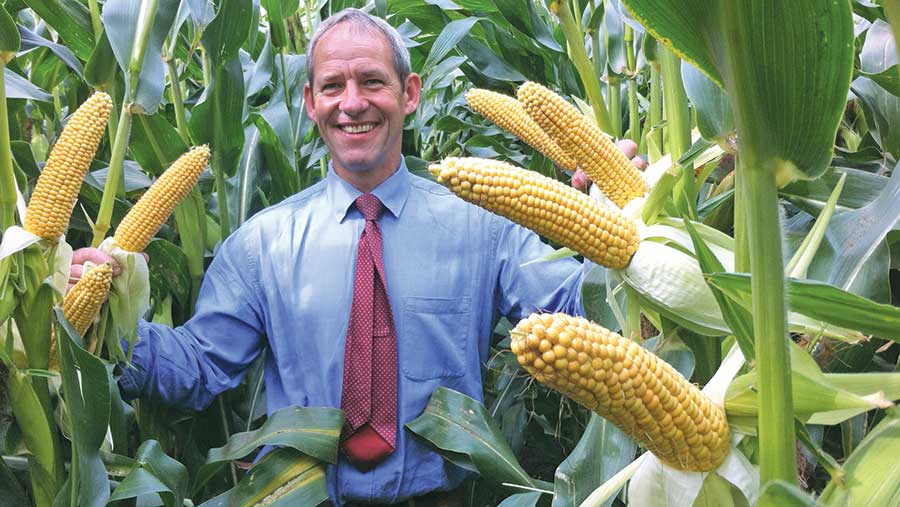 Maize is an expensive crop to grow, costing around £300/acre, so getting it right and achieving good yields are important.

There are three key aspects of field selection:

Altitude: Maize is a sub-tropical plant and the altitude at which it is grown is critical to its ability to mature.

Wherever the crop is grown above 140m there must be other factors to favour of growing at this height, such south-facing and free-draining soil.

Aspect: Aim for south-facing sites that are not too exposed.

Soil type: Maize needs a dry soil in the spring, but not a soil type that will dry out too much in late spring when the young plants are developing.

Growing maize on heavy, clay-type soils is probably the biggest handicap to trying to get the best out of this crop because of the difficulty in creating the correct seed-bed in the spring.

Medium loams that are easy to work in the spring, free-draining and will warm up early in the season to enable the young plants to get the best possible start are the most favoured.

Very free-draining and light, sandy soils can be too extreme.

The aim is to achieve a deep, loose seed-bed. Maize is a free-rooting plant so there needs to be no restriction on root development in the early stages.

Crops that struggle with compaction then struggle to mature and achieve optimum yield.

Farms with heavy soils often need to winter plough to achieve the correct seed-bed in the spring. But if there is a wet March, water can hold under the furrows and can take a long time to dry out.

The topsoil can look dry and good, but it’s important to look deeper down and see what conditions are really like.

Crumblers and other machinery that will cultivate the ground to achieve the openness of the soil that maize requires for sowing should be used rather than any kit that will compact the bed. Being able to kick a foot through soils is a good guide.

Maize seed should be drilled to a uniform depth and into moisture.

Soil temperatures should by 8C first thing in the morning for four to five consecutive days for maize to grow.

The last 10 days of April should see all maize drilled, but climate will obviously depend on location.

There is an old adage that says for every day that the crop is sown into the month of May there will be a 1% loss in yield.

With seed treatments likely to be banned next year (2020), farmers should drill deeper to avoid rook damage. Seed must be deeper than a rook’s beak and so should be sown into the seedbed at least 7-8cm.

To ensure correct sowing depth, growers should check behind the drill and uncover at least one-meter length of seed to ensure drilling depth and spacing are uniform.

When seed is drilled deeper the seedbed is likely to be colder so growers should expect delayed germination. To offset this, it may be worth taking soil temperatures at 7-8cm deep and drilling later into warmer soils.

Maize seed can come through from a deeper sowing, but if the soil conditions mean that it takes a long time to emerge, and then comes through into inclement spring weather, there will be losses.

All sorts of drills have been evaluated for maize over the years, but most growers come back to precision drills and 76cm rows. Maize needs drilling slowly with one seed delivered every 11-13cm.

This should be based on experience of what has already been grown or what is being grown successfully on farms where conditions are similar.

Yield is paramount for dairy farmers growing forage maize and must be a high priority in variety choice.

A modest target is 49.9t/ha (20t/acre) freshweight. Always select a variety that has the potential to give the level of maturity needed by the end of October.

Once drilled, all fields should receive a pre-emergent herbicide to combat weeds.

This will also mean post-emergence herbicides have less work to do.

Don’t delay weed control. Once they reach the 2-leaf stage they will start out-competing maize.

Maize is very poor at competing with weeds in its earliest stages of development so this must be avoided.

Nitrogen is the driver and a lot of crops just don’t get enough because of an over-estimation of what the slurry can provide.

And 150kg/ha of Nitrogen

Although these will vary depending on soil indices or where large quantities of FYM or slurry have been applied there should be no requirement for P and K.

Therefore, farmers need to know precisely what nutrients have been applied by slurry or FYM.

Ideally, the application of nitrogen should be split with 75% in the seedbed and the remaining 25% applied at the 1-3 leaf stage. This will help the crop get through its yellow phase often seen at emergence.

When maize follows grass there can be pest problems such as wire worms, but growers need to be aware that leather jacket and frit-fly sprays are banned after 31 March.

Although maize is a relatively pest-free crop to grow, the removal of these treatments may have an impact in the future.

European corn-borer has been a problem in the South West and eye-spot can also occur in some crops.

Insecticide dressings can be applied at drilling and there is a fungicide dressing to prevent rotting of the newly drilled seed.

These dressings break down after 21 days so there can be a risk where there is slow emergence of seed in cold, wet seed-beds.